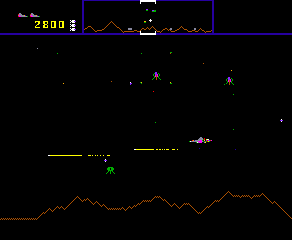 Defender is an arcade video game developed and released by Williams Electronics in February 1981. A shooting game featuring two-dimensional (2D) graphics, the game is set on a fictional planet where the player must defeat waves of invading aliens while protecting astronauts. Development was led by Eugene Jarvis, a pinball programmer at Williams; Defender was Jarvis' first video game project and drew inspiration from Space Invaders and Asteroids. Williams planned to display the game at the Amusement & Music Operators Association (AMOA) trade show, though development delays resulted in the team working on the game up until the show started. Defender was one of the most important titles of the Golden Age of Video Arcade Games, selling over 55,000 units to become the company's best selling game and one of the highest-grossing arcade games ever. Praise among critics focused on the game's audio-visuals and gameplay. It is frequently listed as one of Jarvis' best contributions to the video game industry, as well as one of the most difficult video games. Defender was ported to numerous platforms, inspired the development of other games, and was followed by sequels and many imitations. Defender is a two-dimensional side-scrolling shooting game set on the surface of an unnamed planet. The player controls a space ship as it navigates the terrain, flying either to the left or right. A joystick controls the ship's elevation, and five buttons control its horizontal direction and weapons. The object is to destroy alien invaders, while protecting astronauts on the landscape from abduction. Humans that are successfully abducted return as mutants that attack the ship. Defeating the aliens allows the player to progress to the next level. Failing to protect the astronauts, however, causes the planet to explode and the level to become populated with mutants. Surviving the waves of mutants results in the restoration of the planet. Players are allotted three chances (lives) to progress through the game and are able to earn more by reaching certain scoring benchmarks. A life is lost if the ship comes into contact with an enemy or its projectiles. After exhausting all lives, the game ends. SPECIAL NOTES ON THE OPERATION OF DEFENDER IN THE BROWSER: Defender is a particularly difficult game to play, both in the original Arcade version and especially in this browser-based edition. Here are some basic tips: First, all Williams games of this era require the "ADVANCE" button to be pressed after the game has booted and in Operator Mode. You can press F2 on your keyboard (although many browsers will not understand you pressing F2 or try to do other actions), or you can use the virtual keyboard next to the screen to press the "ADVANCE" button. At this point, the game will be in attract mode and playable. Next, the controls to Defender were unusually difficult for the time, and continue to be involved. They are: If you'd like to change these settings, press TAB and go to Input (This System) to make changes - please bear in mind these changes will disappear when you close your browser.

Defender put players in charge of a ship sent to protect mankind from wave after wave of attacking alien forces.

Armed with smart bombs and the ability to use hyperspace to move quickly around the planet, the player ship must fight against Bombers, Pods, Swarmers, Baiters, and Landers - that can capture the humanoids and transform them into deadly and relentless Mutants. Fail to save the humanoids from freefall or Mutant transformation, and the planet is destroyed.

My tips on how I launch the Defender game and configure the controls:
START THE EMULATOR:
1) Click the power icon "Click to begin"
2) Wait for the emulator files to download and launch

Right hand:
Up Arrow = UP
Down Arrow = DOWN (Note: I prefer using the Left Arrow for DOWN - your choice)
Right Arrow = Smart Bomb

You may want to swap Hyperspace and Smart Bomb key bindings if you prefer, but I like it as above

Anybody knows how to do it?? or if is not possible to use with IOS?

I could not get the game to load in Microsoft Edge, but I was able to get it to load in Google Chrome. So, if you are having trouble, try different browsers.
Now to try to make it work with my X-Arcade Tankstick.
Reviewer: Defendermon - favoritefavoritefavoritefavoritefavorite - July 27, 2017
Subject: FTFY
Everything said below is right except you can change the keybindings to whatever you want with tab by scrolling up and down with the arrow keys and enter to select then in the rebind menu in (input for this machine) hit enter to select a control and then press the key you want to rebind it to.
Reviewer: Dr.Klafter - favoritefavoritefavoritefavorite - April 23, 2017
Subject: help starting the game
It took me a while to figure this out. Here's what worked for me:
F3 advances gets you through the diagnostics and starts the game. It will play some sounds and show a multi-color static screen a few times. Then it starts displaying graphics from the game the way it looked in the arcade, and you're ready to play

Press the "5" key to add credits in order to play. (It's the same thing as putting a quarter in the machine.) You'll hear the game music start.

Press the "1" Key to actually start the game.

The controls are just terrible. You need to use your right hand to move the ship up and down with the arrow/scroll keys, but everything else is in your left hand

What's even worse is that due to the placement of the active keys, it's easy to hit the WINDOWS key on many keyboards, and then your start menu comes up and the browser screen is no longer receiving inputs from your keyboard. The game continues but you aren't controlling it - i.e. you die.

Also, it's a very easy/inevitable mistake that you'll press CTRL-ALT and an ARROW/SCROLL key at the same time and you'll tip your display by 90 or 180 degrees

This is just a very stupid layout. I wonder if it will work with a joystick controller. I haven't tried it yet.

Another item missing from above - use the Z key to reverse.